âSacred education is a God given right of each person that begins prior to birth. Our mission is to deliver this inalienable right thereby facilitating our ultimate purpose, to know God.â 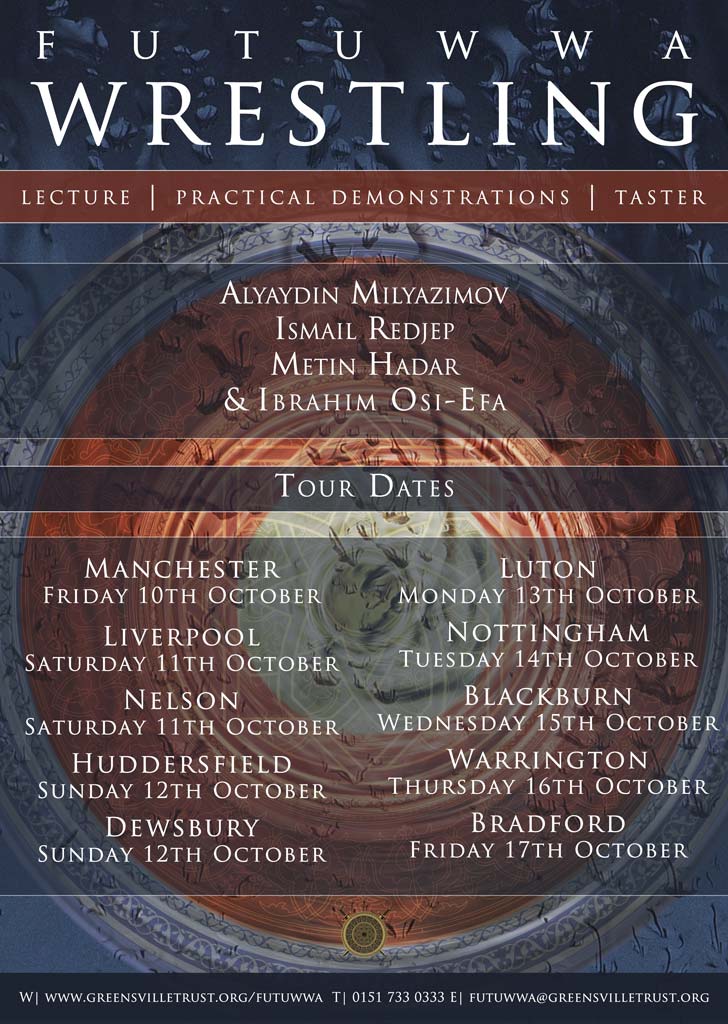 Practical demonstrations with national and international champions. Includes short lectures on the Prophetic Sport and information regarding the launch of five new wrestling clubs across England.

Alyaydin Milyazimov was born in Ustina, Polovdiv and descends from a line of Turks who settled in modern-day Bulgaria when it was under Ottoman rule. Bulgaria is renowned for its love of wrestling. As such, Alyaydin has devoted his time and wealth to practising the sport and training others in it. One could say that the sport is in his blood as one of his uncles, Nejdet Zalev, won the Silver Medal in Freestyle Wrestling (bantamweight) in the 1960 Summer Olympics which were held in Rome.

Soon after, he decided to train with adults and his travels took him to Germany where he competed with bantamweight wrestlers that were two years his senior. He then went to Turkey and spent eight months training with another of his uncles (Burhan Sabancioglu) who was a World & European Champion in Freestyle wrestling. Whilst there, he took part in a national competition and came third. After returning to Bulgaria, he took part in national competitions at both Junior level (where he came first) and Adult level (where he came fourth). When he reached eighteen, he managed to come second in the same competition and third in an international competition (held in Moldova). Thereafter, he was conscripted to the Bulgarian Army and served for eighteen months which forced him to put his wrestling career on hold.

In 1997, he left the army and resumed his career in wrestling by becoming a coach in the sport. He coached numerous teams throughout his career, but one of his great achievements was to coach a team that came third in the national competition in Bulgaria. This same team then came first in 1998. Over the next few years, his team dominated the competition and usually competed for the top three spots. A significant number of individuals that made up the team went on to become professional wrestlers themselves and from amongst them there were the likes of Emin Eminov who became a European Champion. Emin Eminov along with others from his team, including Tefik Rustemov, went on to represent Bulgaria in the national team

Alyaydinâs career in coaching saw him become president of the main wrestling club in Polovdiv (the second largest city in Bulgaria). He achieved much in that role where a number of his students regularly contended for the top five places (the highest being third) in the various national competitions over a number of years. In addition, one of his younger students won a gold medal in one of the junior competitions.

Alyaydin has moved to the UK to help launch a number of wrestling .

Ismail has had a prolific career in wrestling. He has wrestled for the Trakiec club in Polovdiv (where Alyaydin acted as both head coach and president) from 2000 to 2007. In 2008, he wrestled for the Locomotiv club and then went on to the Levsky club in Sofia spending four years there. He also graduated from the Sport Academy in Polovdiv. He has trained extensively with Alyaydin from 1997 to 2000.

During his wrestling career, Ismail was fortunate to represent the Bulgarian National Team. His highest achievement was to win Silver medal at the World Championship in China in 2007. In the same year, he also won silver at the European Championship in Hungary. He won his first Gold Medal at the European Championship which was held in Serbia in 2008. At national level, Ismail competed in the 66kg category and from 2006-2012 he has won consecutive Gold Medals in the National Summer and Winter competitions.

Metin started wrestling under the tutelage of Alyadin at the tender age of seven. He continued to train right up to the age of sixteen where he won his first Gold Medal when his regional team (from Ustina) came first in the Bulgarian National Championship in 2001. He then pursued his studies in wrestling at the regional Sports Academy while practising the sport with Alyaydin. Whilst at the academy, he achieved twelve different medals at various competitions at the Junior Level National Championships, the majority being Gold Medals.

In 2011, he won Gold at the Bulgarian National Champion (as an adult) at the 50-65kg weight category and achieved a silver medal in the same competition three years later. He has taken part in various competitions including international tournaments.